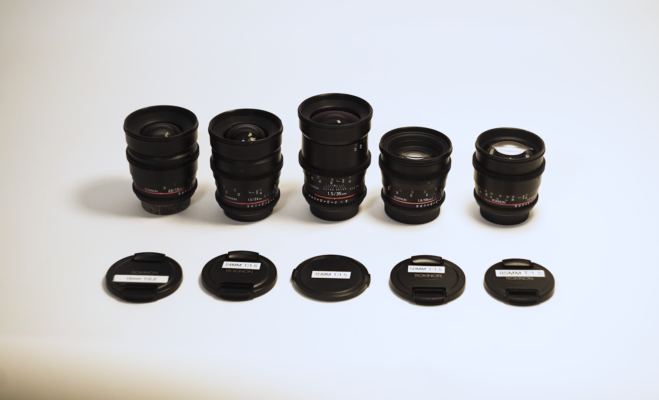 Rokinon Lenses:
To get started on the Rokinon lenses. These are certainly everybody’s cup of tea for the large indie market. Their looks certainly are juicy and reminiscent of the archaic but classic look to the Lomo lenses. They are slightly more sublime in a good sort of way. But also in bad sorts. The good thing about the Rokinons is their speed and their clarity even while using on a full-frame sensor. They are more modern lenses with slightly more green overtones to the brighter images. That is great for creating a brighter, clearer image with good saturation and coating.

Mainly the big thing that stands out is the Tokina lens. Yes it is a different brand, will it make a difference ? No. It is so wide and so rectilinear and the skin tones are so on par. The lens is normally not even close enough to get a person’s face up close. It is very dramatic. It is better than any of the other wide angle Rokinon lenses past the 16mm in terms of rectilinear distortion covering full-frame! Some people might like to argue that the Tokina 11-16mm is not a full-frame lens and it is made for apsc cameras. From 11-14, yes; but from 15-16mm, it will cover the full-frame a7s’s sensor. That alone makes this set very versatile. However, not too elaborate.

Here is a more inclusive list of the near-complete Rokinon set: 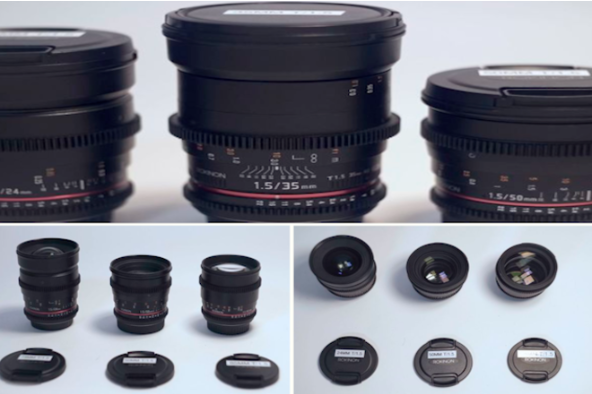 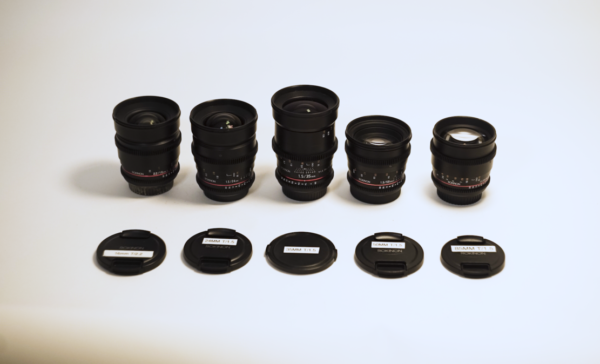 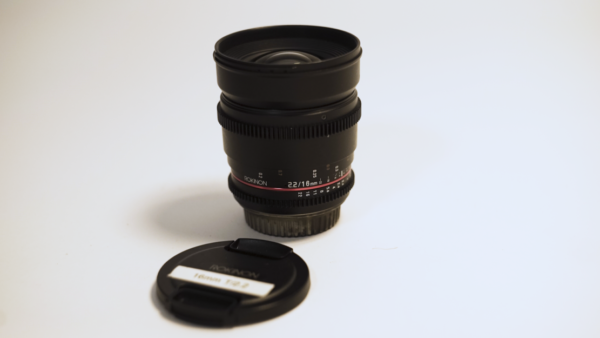 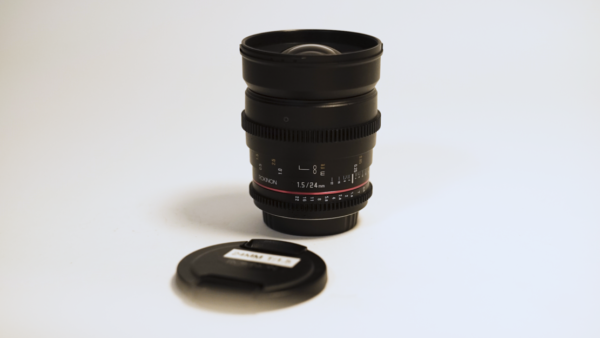 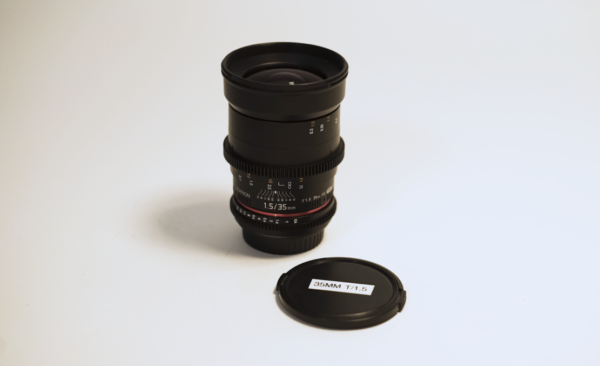 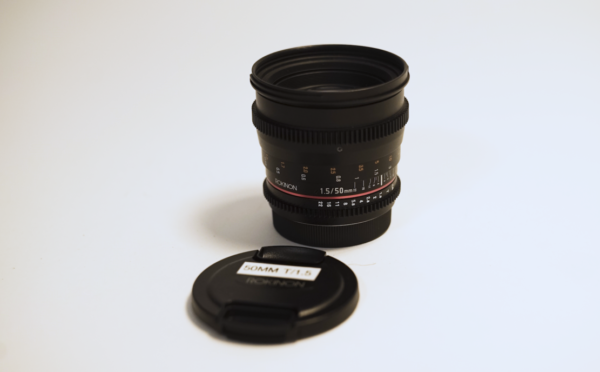 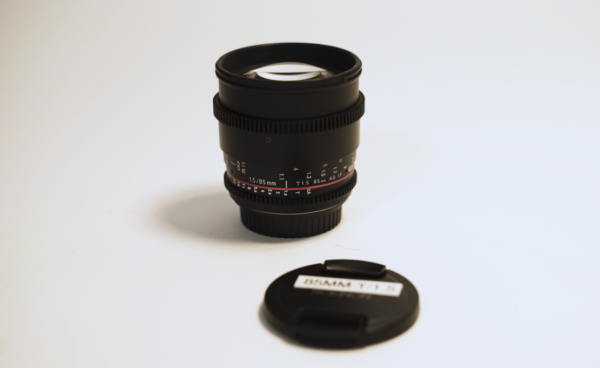 From: $19.00
The Rokinon 10mm is a great lens, if used on a full-frame camera. The viewer is always most omni-present and of the curvature and angle of the lens. Straight walls bend very evenly. I don't imagine tilting would be a desired effect for narrative films. As tilting makes the distortion most apparent. Panning looks great though. Objects coming at the lens from the left or right do not look very widely stretched. Up and down is another story. Tilting with this lens will make any videographer look amateur, but sometimes it's what we don't do that makes an image look great! The reason I feel it's so important to talk about the 10mm and the 12mm lens because it is an aps-c lens. And so the question becomes, should I look at this set as ideal for Full-Frame or Super 35mm? Well since the widest lens is an aps-c lens, I would be inclined to talk more about the croped sensor option. Because, for the most part, these lenses are great as Full-Frame. So how are they as Super 35mm?

To shoot Super 35mm, through one of the multitudes of camera sensors to do so, means that you will have a brighter image, with less vignetting and greater depth of field. The reason this can ben important is for films understanding if they want to maintain any sort of soft-but-even sort of look while filming at the wider side of the iris. When shooting on the full-frame sensor, vignetting will occur more naturally when you are shooting wide open. For that reason, shooting full frame will have a bit of a heightened mood, more dramatic. And shooting Super 35mm will have a warmer, less contrasty look to it that may fit a comedy or a romance. Something not quite as moody.

It is especially helpful having a 100mm macro, being that neither 85mm nor 135mm focus close. The bokeh for the 135mm is a welcome addition. Offering sharper clarity, slightly greater depth of field that would be expected, and a compressed telephoto image. The Tilt-Shift offers a superb ultra-wide angle lens with the dual purpose of altering distortion and curving depth of field. The ergonomics of the lens are what give it a very modern feel, and for that reason, it is hard to compare it to vintage tilt-shift lenses, because most vintage tilt-shift lenses either don't have the easiest of feel, they have a hard time being wider than 35mm, and also having the tilt/shift dual purpose makes this lens even more special.

My personal favorites from this collection are the 35mm, because it is sharp even wide open. I have noticed that the 24mm is not all the way sharp throughout the iris range. The 16mm is also an impressive lens. It offers very low distortion and a great f-stop. I use this lens a lot on Red cameras. It is wider than the Sigma 18-35mm f1.8, which can be useful. It is also very sharp colours look very appealing on Super 35mm format cameras.

Another lens that is a hit or a miss for some people is the 14mm lens. There is a large bubble of distortion in the middle of the lens, which is very noticeable when moving the camera. This lens might only be good for static videography shots. It tends to bleed when shot wide open, so use this lens moreso when you can stop down a hair. You might also be able to do shots with the subjects far away to see as little of the bubble distortion as possible. It is a very weird pattern to fix in post.

One other thing I have to mention about the entire set is shooting with them wide open, and where they will really suffer. These lenses boast really nice f-stops, but warning when shooting wide open. These lenses have some nasty purple fringes, which I have picked up most from street lamps, or trees with the bright sky in the background. The purple fringes of these lenses go against my ideal of what a vintage look is. Purple fringes are impossible to color correct or even get rid of, in my experience. Closing down a stop or two helps immensely. Sometimes, there is not enough light and you have to sacrifice having purple fringing. It is not horrible, I would just discourage those seeking a vintage look to stop down, as purple fringes can be a sign of mystery being afoot. Which is more of a modern look!

One thing I do like about the lenses, when shooting wide open, is I notice a little bit of diffraction of light coming from the bokeh of the 24mm. The bokeh is less smooth, being this is a wide angle, which is not uncommon. And brings with it a little more focus to the 'in-focus' subject. It's less through flattery and more through diffraction, or as one might call it "bulky bokeh" that a viewers eye might not look at the diffraction, because it is less appealing than what is in focus. Diffraction can be an imperfection that works well for cinema, is my point.

The lenses themselves are very great. But they leave me wanting more of an arsenal of vintage lenses that offer the affordability, but also the cinematic advantage of these lenses. These lenses are what made me decide to invest so much into vintage lenses. It was to understand more of what theses lenses are accomplishing, by allowing myself to distance myself from them, and shoot with many different Russian lenses that offer truer skin tones and more classical imperfections than the Rokinons.